Author's Note : This was written before public companies became conscious of the fact that transparency enhances shareholder value. Yet we find ourselves increasingly talking to machines, unable to solve a problem which is other than just ordinary. 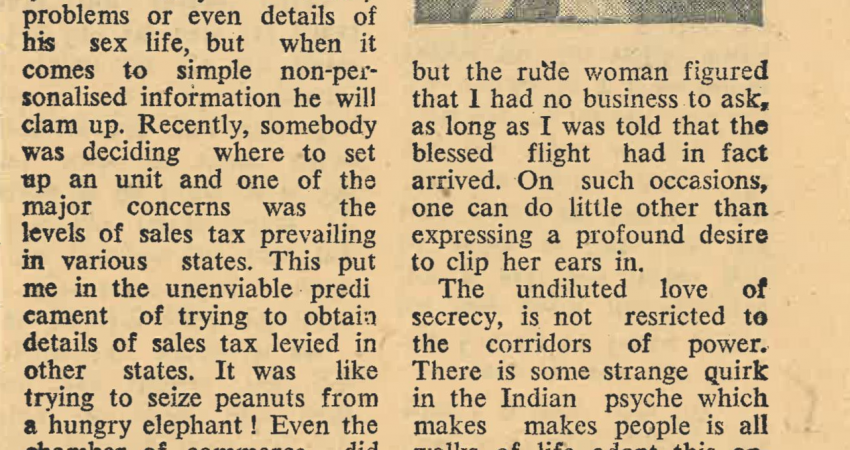 In the past we have had occasion to ruminate about the bureaucratic temperament in these columns. Red tape and nepotism are universally prevalent, although in varying degrees. Yet, the cud-chewing Indian babu, has certain unique characteristics, which makes him stand apart from his counterparts abroad. One of these is an absurd desire to jealously withhold legitimately public information.

An Indian babu will readily confide to you his family problems or even details of his sex life, but when it comes to simple non-personalised information he will clamp up. Recently, somebody was deciding where to sett up an unit and one of the major concerns was the levels of sales tax prevailing in various states. This put me in the unenviable predicament of trying to obtain details of sales tax levied in other states. It was like trying to seize peanuts from a hungry elephant ! Even the chamber of commerce did not have this basic information. What is even more absurd is that those who had the information were unwilling to divulge it ! Since when did the basic rate of a public levy become a state secret??

The other recent altercation I’ve had on this issue is with Indian Airlines. On inquiring whether the arrival of a particular flight was delayed or not, the only brusque reply received was that it had already arrived. Yes, but did it arrive behind schedule or not was all I wanted to know. Undoubtedly, one has logical reasons for asking such questions, but the rude woman figured that I had no business to ask, as long as I was told that the blessed flight had in fact arrived. On such occasions, one can do little other than expressing a profound desire to clip her ears in.

The undiluted love of secrecy, is not restricted to the corridors of power. There is some strange quirk in the Indian psyche which makes makes people is all walks of life adopt this approach. The stoic close-door approach of corporate managements is the bane of financial reporters. There is of course a need to maintain confidentiality in most aspects of business. For instance only the most foolish would divulge information which a competitor would love to get hold of. But there is something very wrong about companies operating on public funds being coy about even the most routine and insipid information. In such an atmosphere, rumours and gossip flourish doing more harm than good to all concerned.