The Stock Exchanges in India have grown in size over the years.  Whereas in 1946, there were just 1,125 listed companies, their number has grown to over 5,000.  The market capitalisation during the same period has grown from Rs.971 crores to around Rs.25,000 crores. 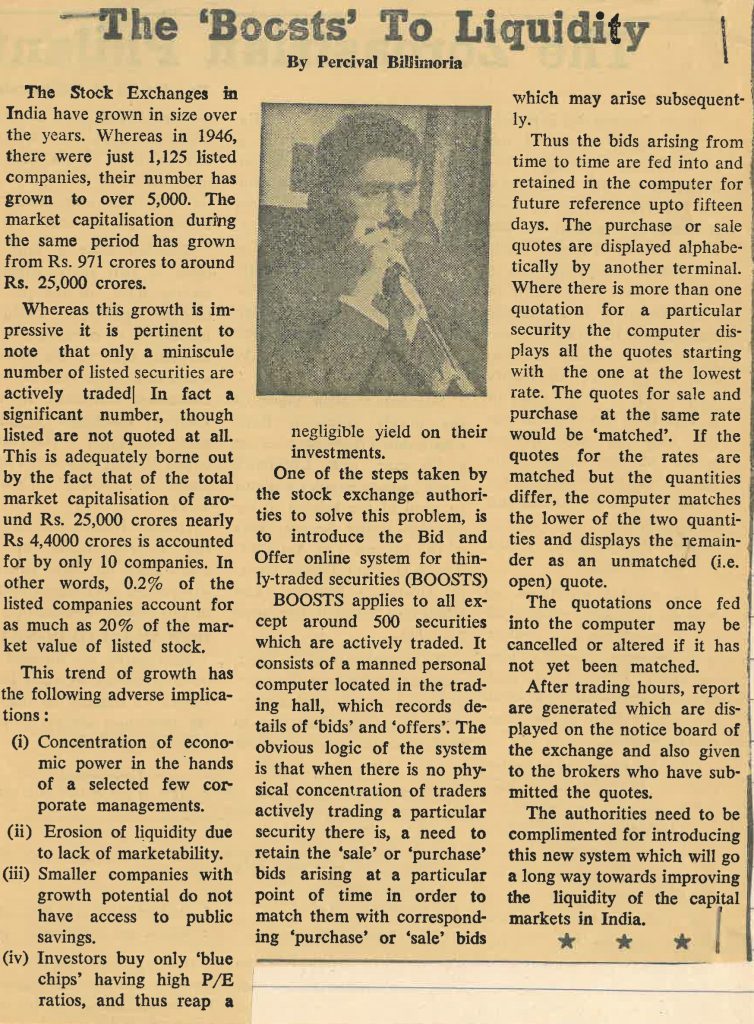 Whereas this growth is impressive it is pertinent to note that only a minuscule number of listed securities are actively traded.  In fact a significant number, through listed are not quoted at all.   This is adequately borne out by the fact that of the total market capitalisation of around Rs.25,000 crores nearly Rs.44,000 crores in accounted for by only 10 companies.  In other words, 0.2% of the listed company account for as much as 20% of the market value of listed stock.

This trend of growth has the following adverse implications:

One of the steps taken by the stock exchange authorities to solve this problem, is to introduce the Bid and Offer online system for thinly-traded securities (BOOSTS).

BOOSTS applies to all except around 500 securities which are actively traded.  It consists of a manned personal compute located in the trading hall, which records details of ‘bids’ and ‘offers’.  The obvious logic of the system is that when there is no physical concentration of traders actively trading a particular security there is, a need to retain the ‘sale’ or ‘purchase’ bids arising at a particular point of time in order to match them with corresponding ‘purchase’ or ‘sale’ bids which may arise subsequently.

Thus he bids arising from time to time are fed into and retained in the computer for future reference up to fifteen days.  The purchase or sale quotes are displayed alphabetically by another terminal.  Where there is more than one quotation for a particular security the computer displays all the quotes starting with the one at the lowest rate.  The quotes for sale and purchase at the same rate would be ‘matched’.  If the quotes for the rates are matched but the quantities differ, the computer matches the lower of the two quantities and displays the remainder as an unmatched (i.e. open) quote.

The quotations once fed into the computer may be cancelled or altered if it has not yet been matched.

After trading hours, report are generated which are displayed on the notice board of the exchange and also given to the brokers who have submitted the quotes.

The authorities need to be complimented for introducing this new system which will go a long way towards improving he liquidity of the capital markets in India.