Author's Note : A curious flashback to a point where there was a raging debate about whether deficit financing is wise. I am quite sure the answer is - yes but only to a point. Presently, the favoured term is quantitative easing - and the overdose of it will make the world soon realise that it has nothing to do with easing after all.

The Government’s recent blanket ban on expenditure on new projects is symptomatic of a forthcoming financial crunch. When the a record deficit, alarm bells were already ringing in the last Union Budget showed corridors of power. At that time, the Prime Minister’ characteristically terse comment that the “budgetary deficit is high and I don’t like it,” was subject to several interpretations. It conveyed a sense of helplessness in the face of hare realities and at the same time contained the hind of resolve to arrest it’s runaway growth.

Despite other budgetary shortcoming’s, the adoption of a refreshingly honest approach by refusing to indulge in window dressing, was the hallmark of the 1987 budget. By simply stating the obvious, Mr. Gandhi earned for himself the sympathies and understanding of the compulsions he undoubtedly faced. And by his commitment to Parliament that the deficit will not be allowed to exceed the limits laid down, he effectively blunted the edge of those economists and ideologues who scream themselves hoarse about the increasingly huge budgetary deficits. Sadly enough, when looked at in retrospect the Prime Minister’s promise appears to be utopian, and with the next budget around the cornea, the country faces the prospect of yet another record deficit. 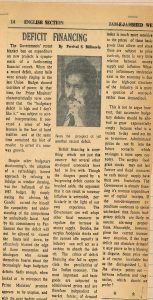 Deficit financing is something which not just this country but several other developed economics have had to live with. Though the dangers posed by a burgeoning deficit cannot be brushed aside, the argument that it can result in runaway inflation in untenable, particularly in the light of our own experience. The Government can well adopt other fiscal measures to regulate he increase in money supply. Besides, the surplus foodgrain stocks and the current idle capacity in industry can well act as a cushion to absorb the deficit. The critics of deficit financing also fail to appreciate the peculiarities of the Indian economy. The most important and basic goods are subjected to administered prices and are therefore independent of market forces; of demand and supply; which cause inflation. The general price of index is much more sensitive to the prices of these basic goods than others and since these are subject to price controls, there is very little relation between money supply and inflation. Whatever inflationary tendencies exist in the economy is due to the high-cost structure of the industry. It is more a question of cost-push rather than demand-pull.

This is not to argue however, hat successive budgetary deficits should be allowed to grow exponentially simply because what is a truism to-day need not be so to-morrow. Administered prices do not fit into the future scenario which envisages a more open economy. The surplus foodgrain stocks may not last forever and fiscal measures to curb money supply have their own limitations. The government is already financing it’s revenue expenditure out of capital receipts. If the non-development expenditure continues to spiral unchecked then future budgetary deficits are likely to assume alarming proportions. Meanwhile, however, given the current recessionary situation, if the huge deficit can stimulate demand it may prove to be a blessing in disguise. Some price rise is of course inevitable but as the distinguished L.K. Jha always points out between inflation and stagnation, which should we prefer?

Next Post The ‘Boosts’ To Liquidity – By Percival Billimoria